Commissioned by the Stan Hoye Foundation for Arts In Celebration ‘88
Premiered 1 October 1988 during the "Arts In Celebration" festival by the Southern Illinois University Wind Ensemble, Michael Hanes, Conductor, in Linus Turley Park, Carbondale, Illinois.
Opus 22     — A.S.C.A.P. work I.D. 381906456
SCORE
Notes
Hoye’s Tribute is a march for wind ensemble, with a detachable fanfare for six trumpets.  It was the winner of a commission competition in 1988 to compose a piece for the first “Arts In Celebration,” a long-running regional arts festival in Illinois.  It was requested that I compose music for marching band to accompany a parade of all the local children on their bikes.   The work was premiered in a park accompanying the huge children’s parade, which opened the entire festival.  Instead of marching band, the piece was performed by the SIUC Wind Ensemble conducted by Mike Hanes, one of the musical rocks of Southern Illinois.  The detachable fanfare alone, which was part of the original premiere, was used to close the festival a couple of days later.  (That fanfare is no picnic.  It was performed by students of Robert Allison, a mainstream and bebop jazz performer, who must have worked very hard with his students to get them to perform the fanfare so musically.)
During the parade, the children marched or rode bikes, winding through the audience and circling the bandstand.  In addition to the fanfare, the piece makes use of several progressively sized bass drums: not resonant concert bass drums but those normally used for marching band, which are tighter and not resonant – sounding more like the pedaled bass drum of a rock drummer.  These, in combination with a knock-off Sousa tune, considerable repetition, and an incessant Drum Major's whistle, seemed apropos to accompany the children, who all got a little out of control with their marching, as they accompanied the crazy music with its wandering metric pulse.  If you can imagine, while listening to this piece, a bunch of kids having a good time, animating some crazy music, you’ve got it.
More NOTES:
​HOYE’S TRIBUTE was commissioned by Carbondale Community Arts (CCA) for their inaugural festival in 1988 they called “Arts In Celebration.”  It was underwritten by a local businessman named Stan Hoye. CCA had just started in the tiny college town of Carbondale, Illinois. It was a grass roots idea, put together by a few women in our tiny college town at the bottom of Illinois to give the place a little sophistication outside the university.  It began as a truly mom & pop outfit, supported by a handful of volunteers one of whom was the university Chancellor’s wife — so there was a little innocuous graft, too.  There was a competition to receive the commission.  Just a few local musicians entered.  I won.  I was really the only composer in the area who not only knew how to compose a score for a large ensemble, but I also had the experience of applying for these kinds of things all the time.  I had learned how to “shake my booty” in various applications in order to acquire all kinds of grants.  Knowing how to talk the flowery talk, package scores and recordings of my music, and of course all of my damn academic degrees (that I had to have to get the Professor job in the first place).

The $1,500.00 commission was put up by Mr. Hoye, and the CCA women arranged for a TV spot of Stan and I meeting – and thus advertising the upcoming festival.  Hoye must have been mid-70’s, and really appeared to be the self-made millionaire that he was.  He was old but was sly and playful.  A nice guy with a very good-looking coiffed wife of approximately the same age – no trophy wife for this decent fellow. The televised meeting took place at the very first rehearsal of HOYE’S TRIBUTE by the SIUC Wind Ensemble. As we were shaking hands when Mr. Hoye and I were first introduced, he leaned over and whispered in my ear, “I’ve got AIDS!”  I was a little shocked by his first words. I backed off a little, and that made him smile a sly thin smile.  He then pointed to his ears with both hands, which really confused me.  And as he pointed at his ears he said, “Two of ‘em!”  And I then noticed the hearing aids that stuck out of both ears.  Of course he was making a little joke, but he also was amused at the irony of a def man commissioning a piece of music!

The original intent of Hoye’s Tribute was to write a MARCH for band so the kids at the festival could ride their bikes around the park as the music was performed.  But then it was also requested that I also write a fanfare to open and then close the festival.  Well, both of those requests were honored - the kids paraded and the fanfare sounded twice.  But as I was composing this piece, I of course, being me, just couldn't help myself from becoming totally immersed in the project and attempting to save the universe, again, with another piece of music.  I made a federal case out of what should have been a simple little children’s’ march.  What Hoye's Tribute became was a huge, march-like piece for wind ensemble, with some snappy beats to inspire the kids on their bikes.  However, the piece began with a detachable fanfare for six trumpets.  That fanfare opened the festival, followed by the bulk of the piece, and then the trumpets were summoned back to the stage the next day at the end of the festival, when they just played the opening fanfare.  So it worked pretty well.

However, it was the “bulk of the piece” that I made a federal case out of.  As a present day composer, I feel that that is my job. I am serious about music.  I am serious about following my muse and taking it exactly where it wants to go.  I am serious about at least attempting to progress the art form of MUSIC into the future.  In addition to making a federal case out of the bulk of the piece, that detachable repeated fanfare set in place certain formal possibilities that I could not ignore.  It forced me to have the entire 15-minute work connected harmonically, thematically, and formally to that fanfare.  For better or worse this just had to happen.  Either way, I think CCA was happy with it, as were the kids and the rest of the town attending the festival.

Interestingly, A few years later my wife Nancy got a part-time secretarial job with CCA, which needed some office help for which they were able to offer a little money.  Apparently, Nancy had some extra time on her hands while she was taking care of our five kids, who were at the time 13, 9, 7, 5, and 3!  Oh yeah, and she also was just elected President of the School Board!  So she thought it might be fun to do some part time work and make a little money.

Not sure where she found that extra time.

I bring this up, because as a composer I always make a federal case out of music. Composing is my profession, and I’m serious about it.  I am serious about following my muse and taking it exactly where it wants to go.  This isn’t about self-expression, it’s about pushing music as far as it will go, progressing the art form, finding new ways to emotionally move my fellow man.  And I am suited for it, because I always make a federal case out of just about everything.

But so does my wife.  And thus we are suited for each other.  She also takes whatever she does, no matter what it is – SERIOUSLY, and makes a federal case out of it.  Whether she had time on her hands or not, she took that part time job at CCA.  And she MADE A FEDERAL CASE OF IT.  She quickly took charge.  Her ideas were good, abundant and appropriate.  And she did all the work anyway, so the original group of folks who hired her didn’t stand in her way. She made them look good.  Smart.  Gradually her position at CCA expanded and so did the organization.  Expanded Exponentially.  Her job became full time.  She set up a board of Directors and made it seem like they had all the ideas and were doing all the work.  Smart. She was given the title Executive Director, although she was also secretary, grant-writer, office cleaner, exhibit hanger, chauffer, reception cook, signage painter, webmaster, etc. etc. She worked tirelessly expanding the effect of her art agency and was still pulling all-nighters into her 60’s.

She worked for CCA for 22 years - about the same number of years that she had been Carbondale School Board President.
She had not only expanded the organization's output of art related activities, but Carbondale grew into “the” center for the Arts in downstate Illinois, with several paid employees, a board of directors, by-laws, good-sized annual budget, and CCA also became a downstate re-granting organization for the primary Illinois State arts organization, The Illinois Arts Council, maintaining a respected presence 350 miles away up in Chicago.  Her crowning achievement was building a home for CCA - it’s own physical building with art gallery & gift shop, tiny recital hall with Steinway grand, kitchen, and reception area.  Her retirement party was the christening of that new building that she could really consider hers: she proposed it, she found the funding, and she oversaw the construction.

Nancy never toots her horn about anything she’s accomplished. So I am doing it.  Nancy has too much class.  She never even talks about herself, actually.  She probably doesn’t think anybody’d be interested, and, if there’s one thing that rings true is that people who accomplish things, I mean really do, don’t brag about it.  They dwell on what they couldn’t accomplish.  They feel somehow inadequate.  They could have done better – they wanted to do more.  I’m certain this is the way my wife feels.  So she’s quiet. Yet she is always ready to listen and encourage others as they go on and on about their perhaps inconsequential lives. This lack of braggadocio once lead one of her more apparently naive friends to refer to Nancy as an "underachiever,” mistaking Nancy’s classy quiet manor for being a timid apathetic sloth.  Ha!  I had a good laugh about that.

Nancy retired the day before we moved away from Carbondale.  And when she retired, the organization had to hire two young women to take her place -- and a year later they found they needed one more.  Talk about your FEDERAL CASES.  Oh and did I mention my wife also has a Boston law degree, is a former member of the New York Bar, where she practiced, wrote Texas law during her time as a legal writer in San Francisco, and once road on a parade float with Omar Shariff. 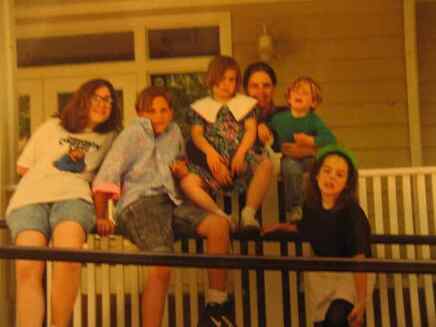