The piece is dedicated to my teacher, Andrew Imbrie.  I studied with Andrew when I was young and green, and then a few years later, when I was a know-it-all doctoral student at UC Berkeley.  When I was green, Andrew was terrific, gently helping and encouraging, and I hung on his every word.  Later, however, his teaching method was different.  He did everything he could do to discourage me, to bring me down, criticizing both large sections and small details of my music, trying to get me to change it.  There were other students who caved in to his demands. One dropped out of the program.  Another made it through but not without the help of a Psychiatrist.  However, by the time I was working toward my doctorate I was sure of my own esthetic, very secure in the music I was writing.  I held my ground.  Professor Imbrie and I locked horns.  On one occasion, when he was dissing an orchestration I was using for the piece I was writing (VIOLIN CONCERTO).  He was telling me that the violin’s accompaniment was “mucky and boring.”  I responded with the smart-assed comment, “Well, then maybe the audience will listen to the soloist!”  Andrew responded by acting insulted and leaving the room.  I sat there for around 15 minutes.  I contemplated what I might do with my life after I’m booted out of the Berkeley Ph.D. program.  Mmmmm, looks like I will be a jazz piano player after all.  Maybe I can get my old job back at Cuneo Press in Milwaukee.  Maybe I’ll….and then in walked Andrew, and we continued — and so did the arguing!  A couple years later, while working on my Ph.D. Dissertation (SEAMASTER), we got into it again.  Andrew demanded that I change an entire section that he insisted was ‘wrong.’  He would not let up.  I acquiesced, and the next week I returned with the section changed exactly as he had demanded.  As he looked through it he smiled saying, “Ahh, this is more like it – the texture is much bet- “  Before he could go on, I interrupted him and slapped the old version on top of “his” version saying, “but this is MY piece, and this is the way it’s going to be.”
I didn’t understand Andrew’s strange, aggressive teaching method until much later.  Although the Berkeley Ph.D. program had a very challenging oral exam, there was never a pretense of a dissertation DEFENSE, as there is in most doctoral disciplines.  I mean, how can you defend a piece of art?  Isn’t the artist’s esthetic the ultimate gage, good or bad?  And because of this, Andrew, I believe, decided that a future composer should be able to defend his/her own esthetic by standing up for it, no matter what the consequences.  And so every composition “lesson” with Andrew Imbrie was a defense of my own compositional style, technique, and musicality.
Not only did I get the degree, but I saw a few of Andrew’s recommendation letters that he wrote during the early part of my compositional career.  I passed.

This piece concerns the divergence of pulsed music and that, which is rhythmically “free.”  Music either implies a beat or it doesn’t. (I continually wonder if there might be a third possibility at this very basic level?)  Pulsed music seems confined, contrived, trapped, repetitious and quite primitive, but it is fun and seems to encourage a hidden and unified audience participation (foot tapping, for example). Pulsed music is primitive, but discovering a musical beat was one of the first accomplishments by modern man – sound without pulse must have occurred prior to that event.  Non-pulsed music seems liberated, more expressive and for some reason more sophisticated, but it is also promotes introspection, subjectively amplifying individual differences and, thus, dividing the listeners.
It is, of course, possible to have music that is pulsed on one level, but quite free on another.  Does this, then, allow for audiences to react collectively separate, individually communal, apart – together??  The title reflects this principle of human association: it is possible for a group of individuals to maintain their individuality while also maintaining their connection.  If a relationship is nurtured, it expands, and it will ultimately allow for the two or more individuals to change over time, perhaps growing apart in philosophy and desire, but retaining a very basic, and surprisingly primitive bond.  The bond is love.

PRESS NOTICE
​(SEVEN) SEPARATE WAYS
— performed by The Archaeus Ensemble in Bucharest Romania
"...through his particular language Frank Stemper succeeds in finding a way of communicating with many levels of audiences without making any stylistic concessions to the modern of our epoch."
ACTUALITATEA MUZICALA  (Romanian Cultural Publication)
Feb 2007 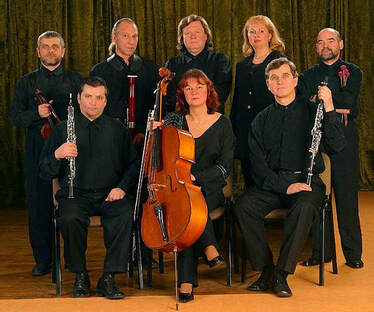