Three Pieces for Clarinet and Piano (2006)​
for clarinet and piano in three movements [10 mins.]

World Premieres by Eric Mandat, clarinet and Frank Stemper, piano
6 APRIL 2007, OUTSIDE THE BOX New Music Festival in Carbondale, Illinois
26 May 2008, INTERNATIONAL FESTIVAL OF NEW MUSIC Bucharest, Romania
Opus 58    — A.S.C.A.P. work I.D. 503919997
​SCORE
PROGRAM NOTES:
Composers, at least this one, are always searching.  It has something to do with internally hearing music that cannot really be composed or expressed, but trying anyhow.  I hope when beginning each new piece, that I will finally find that something and capture it. For me THREE PIECES FOR CLARINET AND PIANO has been such a discovery.  These short pieces were written for no particular reason – with no commission and not even a scheduled performance on the horizon – I wrote them for the hell of it last summer.  What a great reason to compose.
The 2nd of these pieces is perhaps a homage to A. Schönberg:  Although Arnie shouldn’t receive credit for inventing the concept of ostinato, most modern composers are haunted by his in Opus 11.  The first movement, resembling broken glass crossed with getting hit by a train, is very difficult to perform (as is the last).  At times the performers are completely out of sync, which is my own ongoing fascination with heterophony, but at other times are completely in sync – although the rhythm and melody to which they are adhering are completely disjunct and arrhythmic.
It is the third, goofy, movement that seemed to open a door for me, although I am still a little confused as to why.  It contrasts silly and brutal within a schizophrenic platform – if that makes any sense at all (I’m bearing my soul here folks.), and although it begins and ends, it also doesn’t: It is ongoing, continuing, stretching well beyond the last measure, when we will all be at home in our beds.  Somehow, at least for myself, I have managed to alter time’s usual chronology. Somehow, I have built an environment in which the passage of time is only one possibility, one dimension of time.  And there are others. 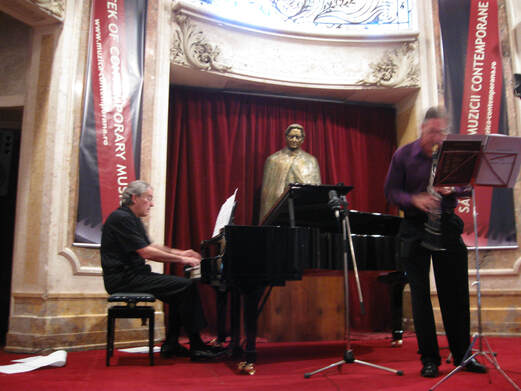 Performing a concert with clarinetist/composer Eric Mandat in Romania